Breakthrough clean technology that removes complex, toxic pollutants from the wastewater produced by heavy industry and renders them benign has put a Canadian firm among the world’s top cleantech companies.

While its technology has gotten the Vancouver, B.C.-based Axine Water Technologies Inc. noticed worldwide, for president and chief executive officer Jonathan Rhone, the innovation doesn’t stop there. The company’s unique service model that delivers its solution right to customers’ plants, and its aggressive export strategy focused on specific sectors and promising markets are also turning heads. 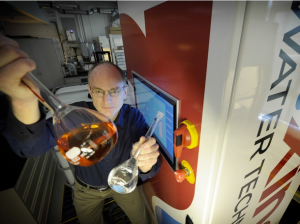 “If you’re in cleantech and you’re not focused globally, it would be an exception to the rule, because the big markets are global for sure,” says Rhone, noting that large industries worldwide “are undergoing massive transformation” in areas such as energy and water efficiency. “They are insatiable in their demand for the types of solutions that Canadian technology companies like ours are supplying.”

Axine means “friendly seas” in Greek. The company’s technology uses an electrochemical process to break down different pollutants and oxidize them into their basic building blocks, such as nitrogen, oxygen, hydrogen and other gases, without producing additional waste.

“We do it very, very efficiently, so we can treat these waters right at the customer’s site, where they can either be safely discharged to the sewer or in some cases the water can be reused,” Rhone explains. This takes care of a “billion-dollar problem” for industries that make everything from semi-conductors and car batteries to paints, chemicals and pharmaceuticals. Such manufacturing processes also use a lot of water, which becomes tainted with so-called “tough organics” that don’t break down naturally in the environment.

“If they’re not treated aggressively, and removed from the wastewater, these pollutants can end up in the food chain—and ultimately in the fridge,” Rhone says. “In the very worst situations, many of our customers have to collect some of these very challenging wastewater streams and have them hauled off-site in trucks and driven somewhere where they’re incinerated or injected into a deep well. That’s a very expensive approach, with some fairly extensive risks and liabilities.”

Axine does not sell its technology to other companies, Rhone says. “We own all of our own plants and we treat the water for customers as a service. We finance, build, install, operate, service and maintain our systems at their sites.” The technology is fully automated and modular, allowing Axine to collect a stream of data to monitor, maintain and analyze the wastewater coming out of a particular manufacturing process.

“This is a very different approach with a very disruptive technology to solve a pain-point,” he says, adding that traditionally a manufacturing plant would have to buy, assemble and operate such equipment.

Axine started with seed financing in late 2012. Its business activities are currently focused not in Canada but entirely in the United States. “It’s a fast-moving market of customers who are very receptive to new technologies, so it’s a great launching pad,” he says.

As Axine looks to markets further afield, like the United Kingdom, The Netherlands and Germany, he expects the Canadian Trade Commissioner Service (TCS) will help the company with local business regulations and rules governing everything from employment to taxation.

“If the TCS is introducing us, there’s a threshold of credibility on both sides, for the exporter and for the local market,” Rhone says.

The company has especially had traction in export markets by offering its technology on-site for industrial players, notes David Tsui, a trade commissioner who covers cleantech in the TCS regional office in Vancouver. “Axine can bring all the equipment and treat everything there. It’s a great idea, it cuts costs, you can make adjustments on the fly and you don’t incur the carbon footprint of moving everything around.”

With a small Canadian market, cleantech companies have few early adopters at home, “so we often have to go outside of our own country to find our early reference customers, and that’s expensive. It requires export knowledge and capabilities right at the first stages of the company,” he points out. “You’ve got to be thinking globally and executing globally from the very early stages of the company. That means building supply chains that are often stretched around the world, and sales and marketing teams often operate remotely.”

The help of the TCS is important, he says. “I see them all the time, around the world. They reinforce Canada’s brand as an exporter of highly competitive products and services and as a great country to do business with.”

Podcast: The Best Industrial Wastewater Treatment System Is The One You Forget